7705
VIEWS
by Keenan Ennis on September 14, 2018
TwitterFacebookBufferLinkedInPin It
SHARE THIS STORY:

Everything You Need to Know Before Climbing the Chimborazo

If you’re a climber that’s visiting Ecuador, the Chimborazo Volcano is an experience that you can’t miss! The Chimborazo’s claim to fame is that its peak is the world’s furthest point from the earth’s center. I know what you’re thinking. Everest is the highest mountain, everyone knows that. That’s partly true – measured from sea level, Everest is the highest mountain… but it’s not the closest to the sun. This is because the shape of the earth isn’t a perfect sphere. It actually bulges towards the middle (like many of us do). This means that the top of the Chimborazo is well over a mile further away from the earth’s center than Mount Everest! You literally will not find a point higher than the peak of the Chimborazo volcano. What’s really cool about Chimborazo is that there are several climbing routes to choose from. This makes it a very accessible climb to people across several skill levels, and interesting for those with some experience. Without further ado, here is the Chimborazo climb guide.

chimborazo night view
The Chimborazo climb be done year-round, but the best times to go are typically considered to be from June to July, and January to February.

For the simpler routes, the best time to go is just before midnight. This will ensure that you’ve descended before 10 am. The reason for this is that the strong Ecuadorian sun can melt the ice and snow, increasing the chance of rockfalls and avalanches.

The Chimborazo weather is commonly cloudy in the afternoon too, which can reduce visibility on the trail. At this altitude, you’re in the clouds!

Preparing for the Chimborazo Climb 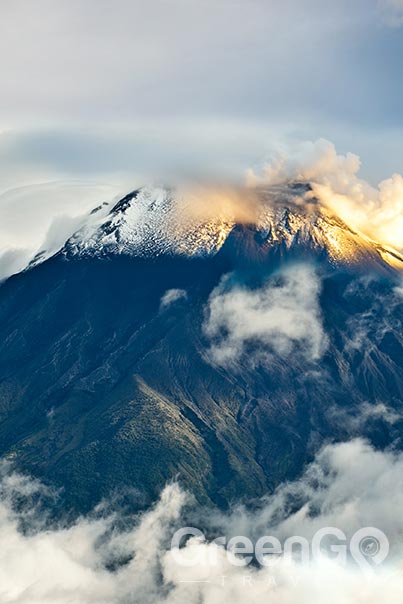 chimborazo in the mist
You definitely don’t want to rush from the beach to the top of the Chimborazo climb (A height of 20,500 feet). Most people would recommend ideally around 2 weeks of acclimatization to high altitude.

This is actually really important if you want to successfully make it to the peak. Aside from bad weather, this is one of the main reasons why groups have to turn around and head back early. You need to be able to handle the altitude.

The nice thing about Ecuador is that there are tons of other mountains and volcanoes to climb to get you ready! For example, you could try the Tungurahua or the Cotopaxi volcanoes and get yourself used to exertion in thin air.

If you’re wanting a softer start to altitude, try hiking the 6-mile trail in Quilotoa which gets up to nearly 13,000 feet. It’s a giant crater that was caused by volcanic collapse around 600 years ago. Since then, it’s filled up with water that’s bright blue and green because of all the volcanic minerals.

Ever since 2012, the Ecuadorian government has made it mandatory for all ascents of major peaks to be made with a professional and certified guide. This is because of several avoidable deaths that happened as a result of a lack of experience/familiarity with the routes.

whymper refuge
There are two common start points for climbing the Chimborazo.

Refuge Carrell hut is at 15,750 feet. This is the lower of the two start points and requires an earlier departure time to make it down the volcano before the sun is too strong. The Carrel Hut can be reached by car from Riobamba, Ambato or Guaranda. The Whymper hut is the most popular start point, located at 16,400 feet. Here you can find bunk beds, food, bathrooms and a fireplace. This hut is titled after Edward Whymper, an English climber that summited on January 4th, 1880. 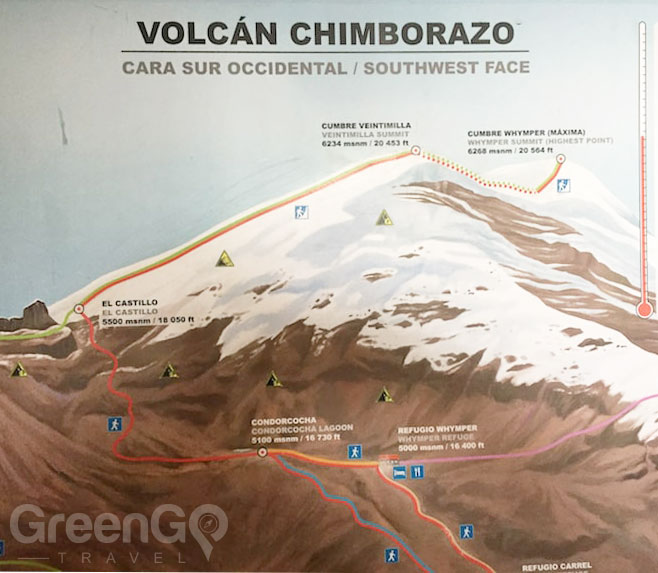 There are three peaks on the Chimborazo (two of which are commonly climbed), and loads of ways to get there. 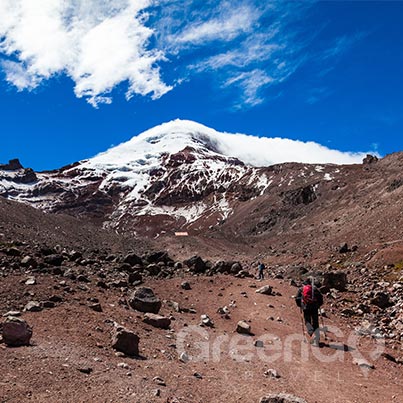 Chimborazo ascent
The easiest climbs are the North Side via Las Murallas Rojas, the North Side via El Castillo (the most popular route), and the Original Route (first climbed in 1880). These are classed as a grade 2 on the UIAA scale. This means that it’s more than just a hike – you need to know proper climbing techniques from some training, although you by no means need to be an expert.

These routes take about 8-9 hours for the ascents. The original route will take you up 4,300 feet, and the other two have a total climb of 3,900 feet. The descents usually take around 2-3 hours.

For all of these, the climb starts before midnight. This is when the weather is the most reliable for climbing, and you’ll be nearing the peak around dawn. This makes for a pretty phenomenal view, and you’ll definitely get that “on the top of the Earth feeling” as the sun breaks over the horizon. 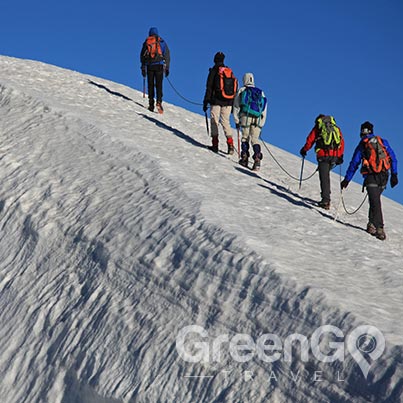 trekking in the snow
Get ready to reach the farthest/highest point on earth’s surface! At 6,263 m (20,548 ft) high, summiting Chimborazo is no feat, a challenging but highly rewarding experience.

The North Side via the Thielmann Glacier and the South West Face are a little more complicated.

The Thielmann glacier can be ascended in 8-9 hours like the previous routes.

The South West Face usually will take a day and a half for the ascent.

These are classed around a grade 3, meaning that the climb is steeper and requires more strength.

Also, hand and footholds need to be thought out a little more.

Climb for the Pros – Chimborazo difficulty 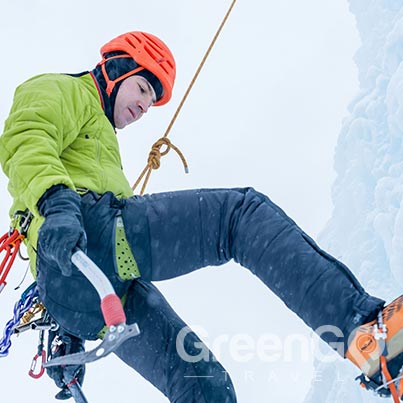 technical climb
Chimborazo is a technical ascent that requires skill and experience.

The West Face is classed as a WI4, which means that you’ll be climbing ice walls.

Seriously cool, but you definitely need to know what you’re doing.

You need ice picks and crampons. There will be near-vertical steps of up to 30 feet.

The altitude doesn’t make this any easier.

If you’re a real enthusiast, Arista del Sol might be just what you’re looking for.

This route is classified as a grade 5, and it’s the hardest route on the Chimborazo to date.

The first 65% of the route is pure rock and overall it takes 2 days to navigate.

Chimborazo summit view
The really cool thing about climbing to the top of the world is that it’s actually very doable. Anyone that’s in good shape and has some basic climbing experience (like climbing Cotopaxi) can take on Big Chimbo.

Another major perk is that, all said and done, you can potentially do it for a few hundred dollars. Compare that with the many tens of thousands of dollars and months of training needed for Everest.

Climbing to the highest point on earth is more than just another notch on the belt. From the peak of the Chimborazo volcano, you can clearly see the peaks of the other nearby volcanoes, like the Cotopaxi, El Altar and Sangay.

It’s pretty common to see the clouds forming a blanket well below you, with other summits poking out in the distance. There is no doubt that you’ll have found the top of the world.

Until the start of the 19th century, society thought Chimborazo the highest mountain on Earth measured from sea level. This reputation led to many summit attempts during the 17th and 18th centuries.

In 1746, Chimborazo was traversed by French academics of the French Geodesic Mission. Their goal was to measure the sphericity of the Earth. They determined that the Earth was an oblate spheroid and not a true sphere. They did make it to the summit of Chimborazo.

In 1799, Alexander von Humboldt, a Prussian geographer, and naturalist that first theorized human-induced climate change began an expedition to the Americas. In 1802, attended by Aimé Bonpland and the Ecuadorian Carlos Montúfar, tried to reach the summit. From his writings of the mountain,  he and his companions had to return due to altitude sickness. They reached 5,875 m, higher than earlier achieved by any European in recorded history. However, the Incans had reached much higher altitudes in the past(see Llullaillaco). Other failed attempts to reach the summit followed, showing the Chimborazo difficulty at this time.

The first Chimborazo climb leading to a successful summit is recorded by Edward Whymper and his Italian guides Louis Carrel and Jean-Antoine Carrel. They were the first of Europe to climb a mountain higher than 20,000 feet (6,100 m). There were many critics who questioned that Whymper reached the summit. Therefore, later in the same year, he summited again by a different route (Pogyos) with Ecuadorian climbers David Beltrán and Francisco Campaña.

What does Chimborazo mean in English?

There are various theories of the origin of the name Chimborazo. To begin the question, the question first must be answered: “What is the language of Chimborazo?” In multiple dialects of Quichua or Quechua, the Incan language, “chimba” signifies “on the other side of the river” or “on the opposite bank.”. The word “razu” means “ice” or “snow.” Local Quichua speakers state the volcano is a Hispanicized utterance of “Chimborazo,” signifying “the snow on the other side.”

Another theory proposes Chimborazo is a combination of the Cayapa Schingbu (Women) and the Colorado/Quichua Razo (Ice) leading to the word “Women of Ice.” One other theory is that  Chimbo is Jívaro for Throne of Master/God resulting in the Icethrone of God.

Not quite sure if you are ready to summit Chimborazo? Maybe the Cotopaxi Summit would suit you better! No problem, our trip advisors are here to help! We have the fastest & most efficient service in the market! Our travel planning services are free, with no payment or commitment involved. Visit Ecuador and its surroundings sustainably.

Previous Story
Why You Should Do an Ecuador Amazon Cruise
Next Story
Amazing Food Served on Galapagos Cruises! (Video)