1147
VIEWS
by Keenan Ennis on May 13, 2020
TwitterFacebookBufferLinkedInPin It
SHARE THIS STORY:

The Culture of Ecuador

Are you visiting Ecuador and the Galapagos islands? Before you go, it’s important to learn a little bit about the culture of Ecuador along with the customs to better understand the environment. Within this post, you’ll find important information that will enhance your trip to the country, and keep up to date with the norms. As a global traveler, it’s important to have a basic understanding to be respectful in a foreign country. 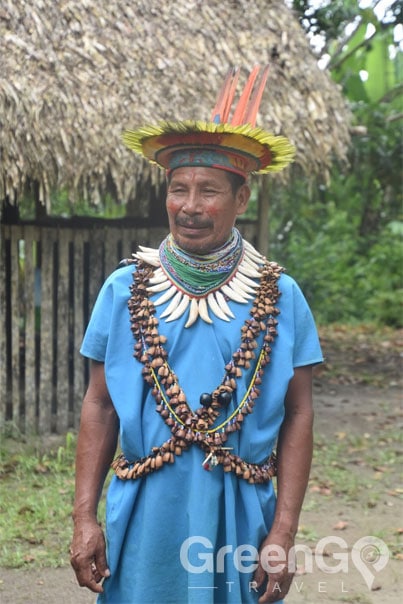 Ecuador has multiple ethnicities, with 72 per cent of the population of Mestizo (combined European and Indigenous American descent) origin.

Numerous prehispanic groups have settled the area, with evidence of settlement dating from 8,000-9,000 BC.

The Inca Empire expanded its reign into Ecuador for many years, until the Spanish Empire conquered the region. Additionally, the Spaniards brought enslaved Africans with them, which encompass a significant population today.

Uniquely, Ecuador still contains many indigenous communities and even uncontacted tribes within the Amazon rainforest. Lastly, Ecuador has a large expatriate community from both Europe and the

United States due to its temperate climate and cheaper living costs. With this extensive history, unique geography, and immigration, Ecuador has developed a wealth of diversity. The breakdown of ethnicities is as follows:

Language brings a fascinating aspect to the culture of Ecuador, as the many ethnicities bring distinct languages with them. Spanish is the primary language of Ecuador, with 93% per cent of the population speaking it. In addition to Spanish, 10 other languages are spoken by numerous ethnicities. The most significant is Kichwa (12%+), the language derived from the Inca empire. When visiting sites like the famous Otavalo market, guests can find the best souvenirs and experience local life. While there, listen carefully to the language of the locals to hear the Kichwa language. The speakers are easily identifiable, with bright clothing including a white blouse, blue skirt, shawl, and jewellery such as a necklace of gold beads and red coral bracelets. 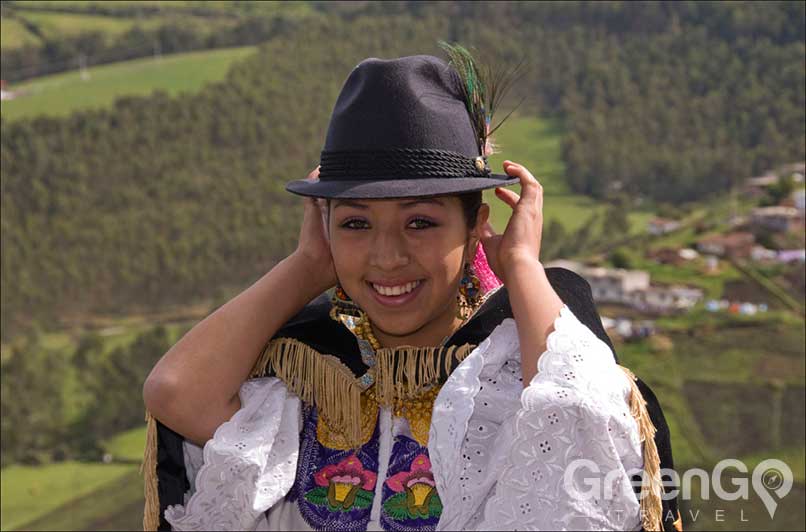 If you choose to visit the Amazon rainforest, you can encounter many Amazonian languages found within the communities of Yasuni national park and Cuyabeno National park.

Note: The number of Ecuadorians that speak English is relatively low compared to the rest of Latin America, scoring very low in proficiency based on the EF EPI standard(#19/19) English is typically spoken by younger generations with higher level of education. Although you may find the occasional English speakers, it is always a good practice to try your best in speaking Spanish!

One of the most important aspects of the culture of Ecuador lies within its cuisine, which frequently brings people together in gatherings. Ecuadorian cuisine is diverse, with a large array of influence from the various ethnicities within the country. Staple foods of the country include carbohydrate-rich foods: rice, potatoes, corn, and Yucca. Specialities include: 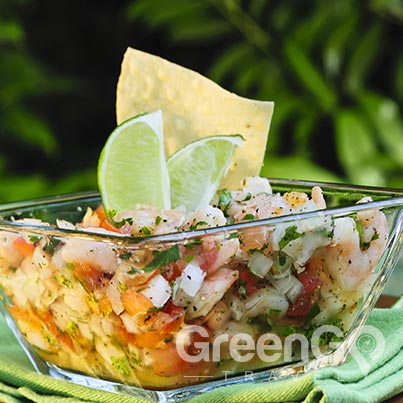 Patacones – Unripe plantains cut into round slices, smashed, and fried in oil.

Encebollado – Tuna, red onion, yuca, and cilantro. Then off with plantain chips and toasted corn.

Encocado – A delicious fish stew with a coconut base.

A large part of the Culture of Ecuador derives from its government. Similar to other democratic nations, Ecuador is considered a constitutional republic run by a president who serves four-year terms. In Ecuador, everyone between the ages of 18 and 65 is required to vote. Uniquely, citizens can vote as early as 16 years of age. The country gained independence from Spain in 1820 as part of gran Colombia and separated into a sovereign state in 1830.

The economy of Ecuador is largely dependent on exports of petroleum and agricultural products such as Bananas ($3.38B), Crustaceans and Shrimp ($3.06B), Processed Fish ($1.18B) and Cut Flowers ($846M) and Cacao. Currently, the country is the 7th largest economy in Latin America. Historically, Ecuador endured a period of economic instability in 1998, eventually leading to a banking and currency crisis and sharp inflation. Resultingly, the US dollar was adopted as the national currency, and a coup d’etat forced the president to resign. Unfortunately for many citizens, those that failed to switch to the U.S. dollar in time suffered significant losses of wealth. Since the poverty rate has declined significantly and the economy has improved significantly.

There is a large variation in the climate of the region, principally determined by altitude. The Coastal and lowland areas are composed of mild humid subtropical climates. The Andean highland areas comprise of cooler climates, temperate, and relatively dry. Temperatures do not vary within regions throughout the year due to the position near to the equator, along with very small variance in daylight hours. The average temperature in the capital city of Quito is 70 °F (21 °C) during the day and 50 °F (10 °C) at night.

Due to the extraordinary history, conflict, and culture within Ecuador, there is a tremendous abundance and variety of art. With the Spanish colonial rule throughout the country in the early 16th century, Ecuador rapidly became the arts center of Latin America. Soon after, the Quito School of art was found by Spanish missionaries and priests. This led to an infusion of local talent, technique, and imagery, birthing many works of art in painting and sculpturing. Some of the most famous artists in Ecuador include Eduardo Kingman, Gonzalo Endara Crow, and most of all Oswaldo Guayasamin.

Music in Ecuador is another varied aspect of the culture. Some of the popular genres include:

Considered the national music, with a slow and melodic style. Themes typically revolve around nostalgic and brokenhearted feelings, the beauty of Ecuadorian landscapes, Ecuadorian women, and the bravery of the Ecuadorian people. This genre incorporates the European waltz with Ecuadorian instruments such as the guitar, mandolin, and other string instruments.

The Andean mountain region produced a style of music called Sanjuanito, with pre-Columbian origins. Commonly played on panflutes (rondador) and other wind instruments. Some of the best-known songs are popular for their merry and joyful rhythm and melody, such as “Pobre corazón”, “Esperanza,” “El llanto de mi quena” and “Sanjuanito de mi tierra.”

This style is is of African origin, and to this day popular in ritual, religious, and festive events celebrating life in the Esmeraldas region. Marimba is very rhythmic, with dances often involving movements of the body. The marimba music is commonly played on palm wood xylophone with bamboo tube resonators, accompanied by drums and maracas.

This type of music is heavily influenced by the Bantu and Congo cultures of Africa and brought by enslaved Africans through the middle passage. In Ecuador, the music is also mixed with Spanish, indigenous, and mestizo influence. The sound ranges greatly within one song with mid and fast-paced tempo, with instruments composed of Bombos, Bongos, and the main instrument the bomba which is a drum with a güiro.

Other music commonly found throughout clubs throughout Ecuador include reggaeton, salsa, cumbia, and bachata, and electronic.

One of the most important values within Ecuadorian culture is family. It is common for extended families to meet on weekends for barbeques, house visits, and spend holidays together. Children often take care of older parents, living within their homes. Additionally, it is not uncommon for children to live within the household of their parents until marriage.

In Ecuador, a common greeting for women to women or men to women is an air kiss on the right cheek (Typically, you don’t touch the lips to the cheek, but rather touch cheeks together and make a kiss sound! Go to your left) For men to men, a handshake is typical. If you feel uncomfortable with either of these in the beginning, a handshake is always fine!

The people of Ecuador are largely Christian, with the breakdown according to Latinobarometro in 2017 as follows:

77% Catholics
14% Protestants
1% Other religions
7% No religious affiliation
1% No answer
During the era of Spanish colonialism, the primary religion was Roman Catholic. Within this time, many ornate and grand churches were constructed, especially in the cities of Cuenca, Guayaquil, and Quito. Since 1986, Quito has separation of church and state.

Represented on the flag of Ecuador, the condor represents the bravery and strength of the country. The Incas thought condors to be messengers of the Gods, with the ability to fly between the realms of two and morph into human form. Depictions of Andean condors on pottery date back as far back as 2,500, even before the Incan reign!

Within the flag is also mount Chimborazo and the Guayas river, depicting the beauty and wealth of the country. Additionally, a golden sun surrounded by the astrological signs of Aries, Taurus, Gemini, and Cancer (March through July) which was the period of the Revolution of 1845.

Colors of the Flag

The red symbolizes the bloodshed by the soldiers and martyrs during the battles of Independence. The blue represents the color of the ocean and the sky. The yellow symbolizes the bounty and fertility of the agricultural harvest and the land.