1103
VIEWS
by Keenan Ennis on May 20, 2020
TwitterFacebookBufferLinkedInPin It
SHARE THIS STORY:

Galapagos Sharks – Everything to Know

How Many Galapagos shark Species inhabit the Islands?

Another unique species is the recently discovered Galapagos bullhead shark. This species only lives within the waters of the Galapagos and off the coasts of Peru. This small shark only reaches lengths of one meter, and scientists are currently collecting data with the help of Galapagos visitors like you! 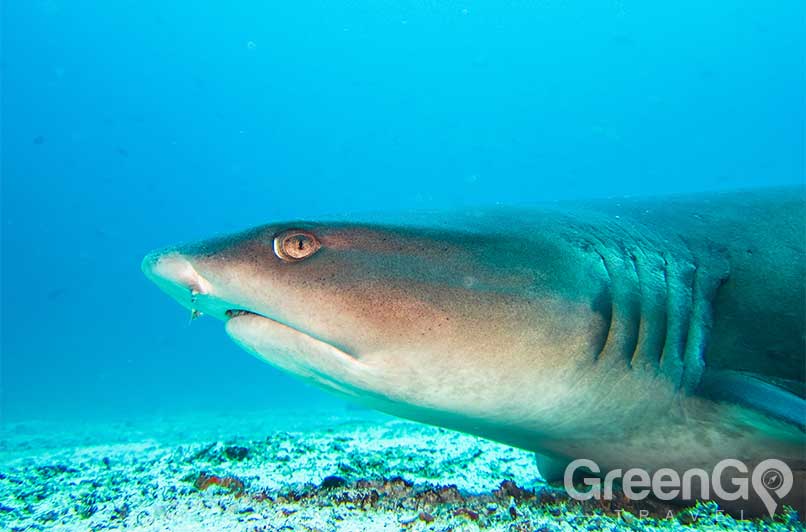 A friendly and curious shark of the Galapagos

Will I see any sharks in the Galapagos?

Typically, cruise based tours have a lot of snorkeling excursions, at least one to two a day. During these excursions, you are highly likely to see at least one to two species of Galapagos shark, and often many more. Some of these species include the white-tipped reef shark, black-tipped reef shark, Galapagos shark, the Port Jackson shark. The Galapagos Scalloped Hammerhead shark is more of a rarity on regular cruise-based adventures but can be seen with a little luck! If you are a scuba diver looking for a liveaboard cruise, you will see them without a doubt!

Are the Sharks in Galapagos Dangerous?

Shark encounters are remarkably rare—despite the widespread media coverage they always sustain. In fact,the likelihood of being a victim of a shark encounter is lower than the chances of being struck by lightning, part of a car or bicycle accident, or attacked by a domestic dog. Look down into our myths section at the bottom to get a better perspective on the statistics. Since recordkeeping began of shark attacks in the year of 1854, only eight attacks have been registered. These incidents involve surfers, fisherman, but have not involved any tourists of land-based or cruise based tours. With over 200,000 visitors per year, the chances of a shark incident are slim to none.  Knowing this, visitors should feel relaxed in the Galapagos waters while enjoying snorkeling and diving activities. 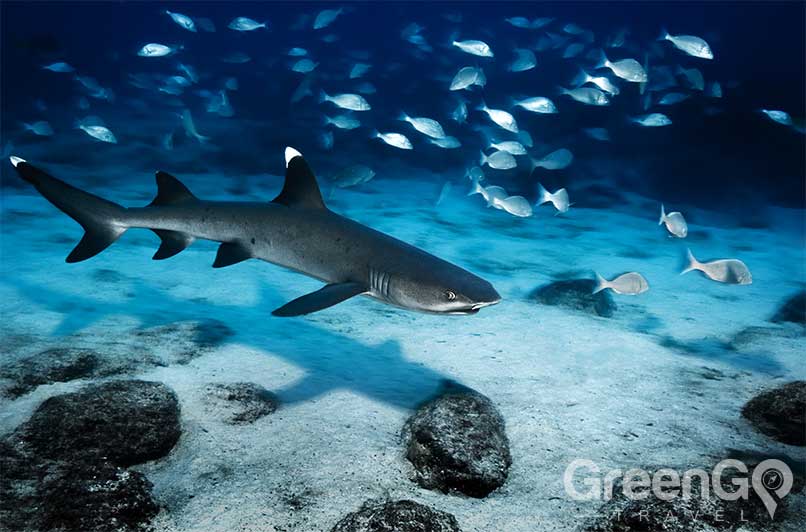 What do Sharks Eat in the Galapagos?

The diet of the Sharks in the Galapagos is based on shellfish, mollusks, and fishes. A rarity, but they have been observed occasionally eating or attacking marine reptiles, sea lions, and fur seals.

How Galapagos Sharks are beneficial to an ecosystem

Galapagos sharks play a crucial role in the ecosystem. The primary roles are maintaining the food web, cycling nutrients, engineering habitats, and reduction of disease transmission. An example of them maintaining the food web is by shepherding certain species of fish away from specific areas through fear, thereby allowing specific corals and seaweeds that would otherwise be predated by fish.

Galapagos sharks migrate from island to island, and often off the coast of other countries. After migrating to faraway locations, they excrete nutrients – AKA Shark Poop – leaving nutrients for other creatures of the ocean.

Sharks are also important “ecosystem engineers.” They aren’t leaving skyscrapers behind, but rather leaving behind the leftovers of predated creatures. The leftover creatures then transform into a new home for a new creature, a nutrient-rich one at that.

Sharks also reduce disease transmission, quickly taking out the sickly creatures that may be carrying disease. This prevents the transmission from spreading into the ecosystem and harming other creatures.

A school of hammerhead sharks in the Galapagos

The whale shark of the Galapagos

3. Myth: Shark can smell blood for a mile away. Although some sharks have a smell that is 100 times better than those of humans, they cannot sense smell from a mile away. The most a shark could smell is about a quarter-mile, and that is on the upper end of sharks with high abilities for scent. Moreover, if they smell the blood they don’t go into a frenzy, and the scent takes awhile to travel through ocean currents. Lastly, sharks are fairly picky about their prey, and humans are not on the menu.

If you are interested in a visit to the Galapagos islands, take a look at our guides to the Galapagos animals and marine life. Want to plan a trip? Speak with our professional travel team to get more information, and find out which vessel or land-based option is right for you!