1260
VIEWS
by Keenan Ennis on September 30, 2019
TwitterFacebookBufferLinkedInPin It
SHARE THIS STORY:

Evolution in the Galapagos

Learn about the theory of evolution and examples on the Galapagos Islands. This will make your trip to the Galapagos even more thought provoking then it already will be!

The mystery of evolution is all around us. If you know where to look for it, it makes nature all the more complex, interesting, and beautiful.  Without this natural process driving changes, none of the creatures on this planet would have gotten very far, including us humans.  The topic is vast, with a great deal of information and confusing lingo like “speciation” and “adaptive radiation.”  As we read on, I want to explain some of the various processes of evolution, especially examples of evolution in the Galapagos.

You can bring this information with you while you are on your Galapagos vacation to make it even more thought-provoking as you see the examples in real life. After all, you will be in the same spot where the first seeds of the theory came from an adventurous young explorer of twenty-two years of age, Charles Darwin.

Introduction – Evolution in the Galapagos

At times, planet earth can be very inhospitable towards its “guests.”  To face the trials and tribulations that our planet hurls towards us, creatures develop adaptations. These help them maintain until the next challenge presents itself.  Some of these adaptations happen more rapidly than others. However, the majority of them happen very slowly over millions of years.

I remember in school hearing the term “survival of the fittest.” At the time, I believed that it meant that the fastest and strongest animals would always be the ones that survived as time moved forward. However, this is often not the case. Many times the champion that passes its genes to the next generation turns out to be the smallest creature or the bird with the most average beak size. The one you wouldn’t expect to succeed.  Why am I telling you this story? There is a lot of confusion about evolution, and hopefully, I can clear up some of the haze. 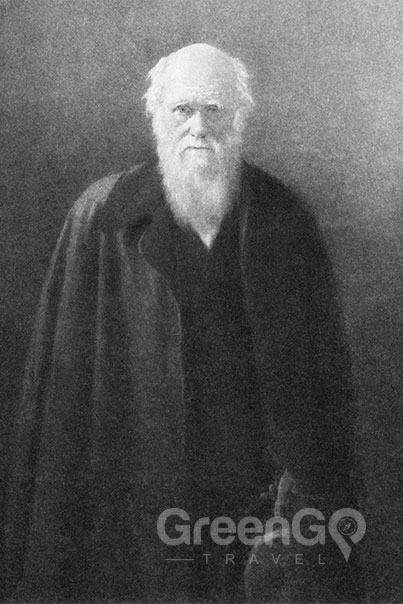 Charles Darwin. Author of Origin of a species
Before explaining some of the evolutionary processes, a little of the history of the pioneer should be given. When Charles Darwin was a young lad, his father pushed him to be a doctor.

To his father’s great displeasure, he was more interested in his beetle collection, shooting, and riding horses through the landscape.

He went on to University in Christ College, Cambridge. Here, he studied the evidence of the existence of God through the design of nature.

After graduating, he felt the burning need to contribute to sciences, traveling to the Canary Islands and later to study natural history in the tropics.

After several more ventures and studies, he eventually was invited for a two-year journey aboard the HMS beagle. His father was upset, knowing he would have to be away that long “wasting his time.”

Imagine his displeasure when the journey ended up lasting five years!  It was during this venture he was able to use his notes and collections to forge his famous work, “On the Origin of Species”

Natural Selection – Evolution in the Galapagos 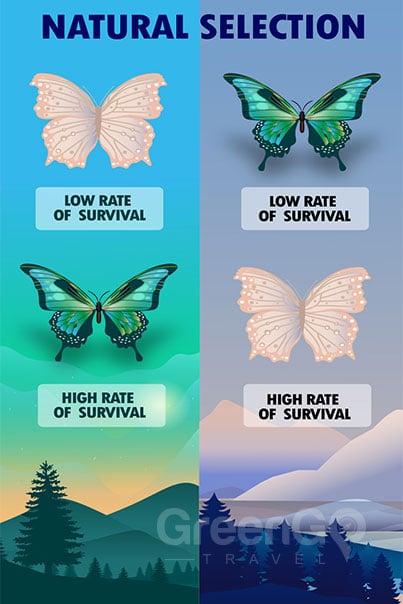 As the environment shifts, so must the butterfly
One of the main pillars of the theory of evolution is natural selection. I will provide a hypothetical example that will easily explain it.

Picture a small island with a population of butterflies. The majority of the butterflies have green coloration, which is in their favor because all the vegetation is of similar colors.

However, due to differences in genetics from mutation, small populations of the butterflies are white. These butterflies usually do not do very well, because they are easily visible to hungry birds.

The birds of the island rapidly pick off all the green butterflies, and the white butterflies successfully reproduce and pass on their genes to the next generation.

In this case, the white butterfly was the “fittest.” Not by a feat of strength did it succeed, but by its coloration.  This is Natural selection.

Natural selection on the Islands

What are some tangible examples that you can witness while you are exploring the Galapagos Islands?  You will undoubtedly take a visit to see the Galapagos Tortoises on an island such as Santa Cruz. Here, you can see an excellent example of Evolution in the Galapagos in terms of Natural Selection.

One of the favorite foods of this gentle giant is the Prickly pear cactus.  Over time, natural selection has created taller and taller cactuses that prevent the tortoises from getting their fill too quickly.

How did the tortoise combat this challenge?  Over a significant period of time, a notch began developing in the shell behind their head to allow for the elongation of their necks. This allowed them to reach higher and higher on the cactus.  This is basically an evolutionary arms race.  When you see the cactus and the tortoise, think to yourself what other physical traits you can see in these species. How they help them compete and balance each other out?  There are many other species on the Islands to witness evidence of evolution in the Galapagos.

Notice the notch on the shell behind the neck

Galapagos Finches – Evolution in the Galapagos 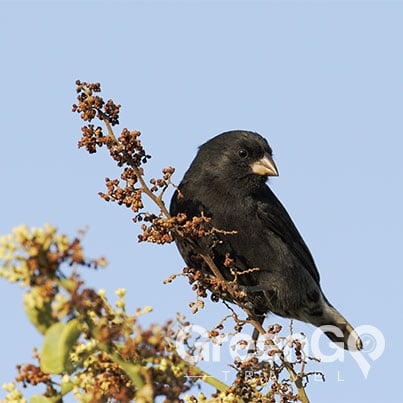 Two famous Galapagos scientists have spent their life devoted to research on the islands, Peter and Rosemary Grant.

They began monitoring finches all the way back in 1973 on Daphne Major, and continue to this day.

Their research shows that for some finches, beak size, shape, and overall body size change depending on environmental conditions. The Medium Ground finch measured in 1973 is markedly different than the one in 2001.

Between these two times, the average body and beak size of the medium ground finch initially decreased, then increased sharply, and then decreased again more slowly. Beak shape abruptly became more pointed in the mid-1980s and remained so for the next 15 years.  Why do things like this occur?

Environmental conditions are constantly changing.  A sudden drought changes the composition of the seeds they eat.  This composition change favors birds with certain beak sizes and shapes and overall body size. By being smaller, they expend less energy. By having a larger beak, they can crush thicker and stronger seeds more easily. The female finches also notice the successful males with these specific traits and choose them to be their reproductive partners. This is Sexual Selection.

This guy is really working sexual selection
As time passes, the population with better traits survives while the other die.

This is another important lesson in Galapagos evolution: Sexual Selection.

If you can manage to bring a pair of binoculars with you to the Galapagos, do it! Carefully examine the species and their food sources, and what might make one individual more competitive.

The last question of evolution I want to describe is the process of Speciation.  In other words, how is a new species created? In order to be considered a new species, they must diverge from one original population.  It must also be impossible for individuals from the new populations to reproduce with the other population.

There are many different finches across all the islands and many look similar. If two entirely different looking dogs can reproduce and be of the same species, why is this not the case with the finches?

Imagine a large heard of elephants. Over time a large river forms and some of the individuals are stuck on the opposite side with no means of crossing.  Over hundreds and thousands of years, these elephants develop different traits. One side of the river has elephants that are significantly smaller, pinkish colored, and make different noises.   The other side of the river has larger grey elephants. When the river finally dries up and these elephants cross paths again, they no longer recognize each other as the same species.

A real life example of evolution in the Galapagos: the finches.

They are separate species because of their isolation from the distance between islands.

Likely, a species of finch was blown off course during a storm as they were migrating, forcing them to various Islands. From there, adaptive radiation occurred.

This is when organisms change rapidly from an ancestral species into many different forms.

Because each of the Galapagos Islands has a unique set of plant species and seeds, the finches have gone through adaptive radiation by developing differing traits that allow them to thrive.

Ultimately, these changes in their behavior and physical form are enough where even if introduced from another island, they would not breed.

If you made it to the end, then I successfully did my job and you weren’t totally confused or bored by the Evolution concepts. These examples and descriptions are some of the major ideas within Darwin’s theory of evolution.  There are more, and you can continue researching them here if you find them interesting. Hopefully, when you visit the Galapagos Islands, you will contemplate the signs of Galapagos Evolution as you enjoy your adventure!