1695
VIEWS
by Keenan Ennis on October 7, 2019
TwitterFacebookBufferLinkedInPin It
SHARE THIS STORY:

Which Galapagos creatures are lurking in the dark, instilling terror? This spooky Halloween special examines the creatures that will give you the shivers!

There are a million adorable creates in the Galapagos. But with Halloween right around the corner, it’s time to show off some of the sinister and terrifying creatures of the Galapagos. Scroll on to find some creepy-crawlies in this isolated park that you definitely wouldn’t want as company in a haunted cave!

A Swarm of Galapagos Serpents ?

Imagine having a nice relaxing nap on the beach, and then waking up to this gang of snakes surrounding you. These Galapagos serpents have evolved into experts at picking up movement. The iguana in this scene is like the victim in a horror film hiding in the closet and holdest their breath, trying not to move an inch!

A Fear of snakes is one of the most prevalent phobias in existence. But why? Scientists have shown that it is an evolutionary adaptation. Early Homo sapiens that did not quickly learn to avoid and fear snakes would be less likely to survive and pass on genes! For those that want to visit the Galapagos, don’t fret. These snakes don’t have humans on the menu and you will not be visiting this area!

Imps of the Darkness ? 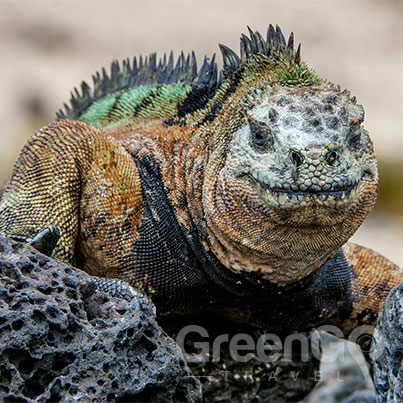 The Imps of the Darkness
This was the term that Charles Darwin gave these little monsters. I can imagine the fear the Spaniards had as they encountered massive colonies of these creepy creatures seemingly guarding the islands. It would be a nerve-wracking experience without any prior knowledge of them. With no idea if they were aggressive, venomous, or any number of other deadly things, how are you supposed to feel!

Charles Darwin experimented on these creatures, tying rocks to their tales to see how long they could hold their breath (It’s a long time!)

In the end, the Galapagos Marine Iguana is quite a peaceful creature and will not give anyone the time of day. They actually have their own sort of cuteness to them, especially when they sneeze out salt water.

Although in modern times these creatures don’t fit the typical idea of a terrifying creature of the Galapagos, at one point they did an excellent job in instilling fear!

If you are planning on a diving trip, you’ve got to take a night dive so you can see this beautifully ugly monster. This bearded alien looks as if it put on lipstick. Perhaps the blood of the latest prey? It is believed that these sweet lips help attract a mate! Don’t get cornered by this beautiful haunted creature, as it may kiss you to death! 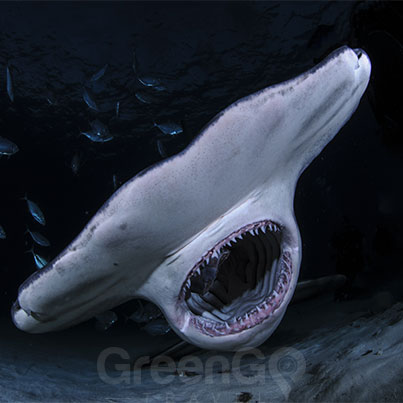 How many teeth do you count?
Although these creatures are completely docile, it doesn’t make them any less frightful in appearance.

If one of these fully grown creatures was swimming right towards me, I know my heart would be racing.

Scientists have recently discovered that the large hammer shape improves their vision, making them superior hunters.

These gentle giants have a preference for eating rays, lobsters, crabs, squid, and fish.

However, we allow them on this Halloween list for their appearance and fact that they are known to practice cannibalism! An added creepy bonus is that spines are often found lodged in their heads from string rays. Spooky.

This is the translation of the Latin name of the vampire squid. You are unlikely to see this creature, as it lives in depths ranging from 600-1200 meters, termed oxygen minimum zones. Although it is a placid creature, “a gentle steward of the ocean’s depths,” gracefully foraging on marine debris that falls from above, it has some creepy characteristics that put it on the list for terrifying creatures of the Galapagos. The oddest feature is that it can literally turn itself completely inside out in an alien-like fashion. It does not suck blood like Dracula but rather got its name from the dark coloring, a cloak-like webbing, and sinister-looking red eyes.

Although the vampire squid doesn’t have a taste for blood, the vulnerable vampire finch certainly does. When a scarcity occurs, the speciest has to deviate from its normal diet and drink the blood of other birds. Who are the victims? The Nazca and Blue-footed Boobies. The vampire finch will repeatedly peck at an area with their sharp beaks until blood is drawn, and suck until they have their fill. But why is it that the boobies sit still and let these tiny birds have their way? The theory says that the finches would remove parasites such as tics from their feathers, creating a mutually beneficial relationship. I don’t know about you, but it seems as if the finches got a little greedy!

Two Galapagos scorpions are inhabiting the islands, but there is no need to fear as they are afraid of humans and the sting is not strong enough to seriously harm a human.

This is more of a fear I would have if I was living on the island, as these little guys often like to hide in warm places…like boots and shoes! So if you decide to live on the island for a time, make sure you give your shoes a good shake before you put them on. 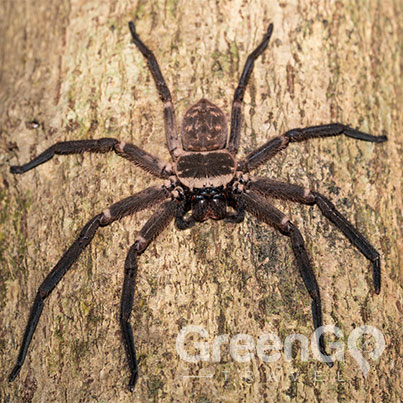 Those are some long legs
If someone needs to take a look at this article, it is the scorpions mentioned above.

The Galapagos Giant Huntsman has been known to eat them AND bats! This spider can grow up to 10 cm in width and is a very fast spider that hunts its prey actively without a web and then injects a powerful venom.

While not strong enough to kill a human, they give a nasty bite.

To give another thought to make you shudder, during its courtship ritual, the male produces a vibrating sound by vibrating its abdomen while keeping its feet firmly planted.

So if you heart a faint “buzz” or “hum above your head”, you better run! (This won’t happen as you won’t be walking through their territory, don’t worry!) A true top contender for the most terrifying creature of the Galapagos.

Looking at insects from afar is great, but I’m not as excited when I feel them crawling up my leg or landing on my neck. This would be especially frightening if I looked down and saw this Goliath centipede! This species may be the scariest of the Galapagos

There have been claims of the Darwin’s Goliath Centipede reaching up to 18 inches (46 cm), but they are mostly found around 30 cm (12 inches) They are nocturnal creates, hunting in the night and spending the day being creepy in crevices and cracks. They are professional assassins, able to hunt creates as large as birds!

Are you scared yet? ?

Don’t be too frightened. When you go to the Galapagos, the guides will keep you safe. Moreover, you will likely not encounter any of the worst of the worst on your adventure, and seeing the sharks will be an amazing experience! Talk to the Greengo travel designers to see if there are any October deals for Galapagos cruises! Thanks for the read and happy Halloween!