1130
VIEWS
by Keenan Ennis on July 12, 2021
TwitterFacebookLinkedInPin It
SHARE THIS STORY:

15 Things to do in Guayaquil – Experience the city to the Max!

Bustling with culture, architecture, and amazing food, Guayaquil is without a doubt one of the most exciting cities to explore. Its the largest city of Ecuador, an important coastal port situated in the Southwest of Ecuador. The beauty and culture have earned Guayaquil the nickname the pearl of the Pacific. Its vicinity to the Galapagos Islands makes it a prime city to visit before experiencing one of the world’s greatest marvels. The locals, known as Guayaquileños, are warm, friendly, and welcoming. Within this guide, you’ll find the best things to do in Guayaquil, including food markets, landmarks, hidden gems, and tips for experiencing Guayaquil to the absolute fullest.

15. Explore Las Peñas and hike to the lighthouse of Santa Ana Hill 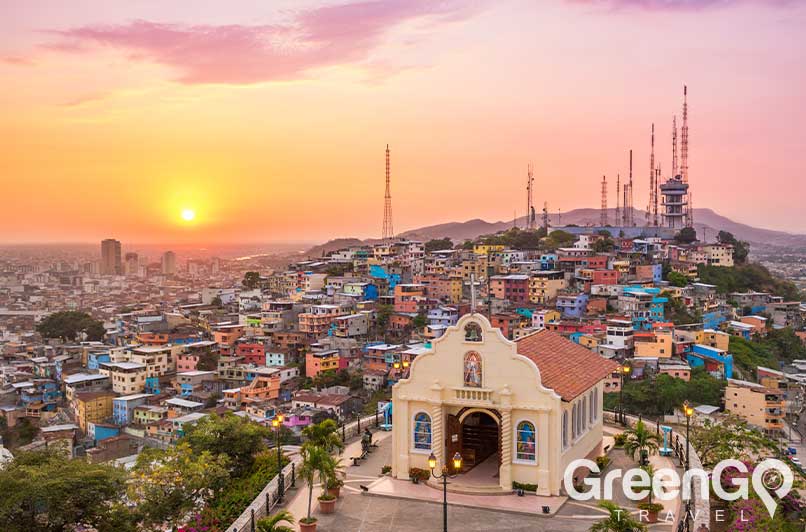 Las Peñas is a vibrant neighborhood with many restaurants, cafes, bars, art galleries, shops, and residences.  What makes the city truly special is the vivid, contrasting colors of all the houses and establishments, which produce a gorgeous facade. 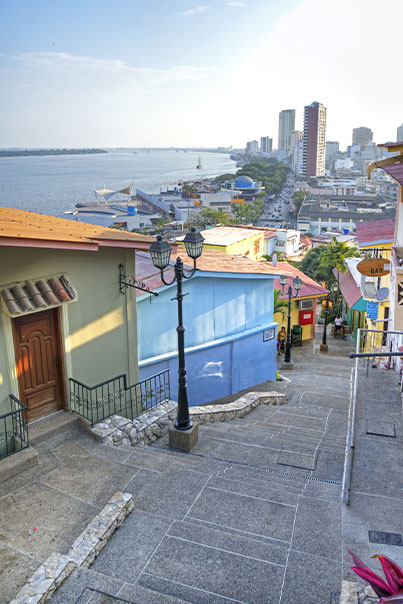 Running through the neighborhood is a stairway leading to the 200 feet (60 m) high Santa Anna hill.

This quarter was the first official settlement in the Guayaquil area, historically known as the “Little Green Hill.”

Pro trip, start your trek in the evening.

This is when the temperatures are cooler and all the shops are open.

From the top, you will find the Chapel of Santa Ana and an impressive lighthouse.

Climb to the top and enjoy the best 360-degree vantage point Guayaquil has to offer.

The sun always sets around 6:30 pm, so time it right and get the best sunset and view at the same time!

Don’t forget the water and camera, and as always, stay aware of your surroundings.

In the heart of the city lies Centennial Park (Parque Centenario), a breathtaking colonial plaza with extreme significance to the city of Guayaquil. 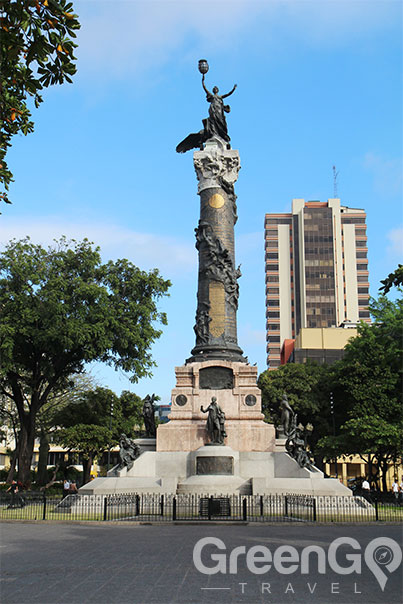 It contains five hectares of manicured gardens, benches, and monuments, most importantly the Liberty Column.

Perched atop a spectacular rose marble pedestal is an impressive 88-foot statue depicting the country’s four founding fathers who fought for independence.

Sculpted along the column are key moments in the fight for freedom, and engraved below is the Declaration of Independence.

Take a respite from the sun under the shelter of the great trees absorb some of the city’s fascinating history. Like other parks, iguanas are guests.

On your way out, look out for the Fountain of the Lions, one of the biggest fountains of the city. 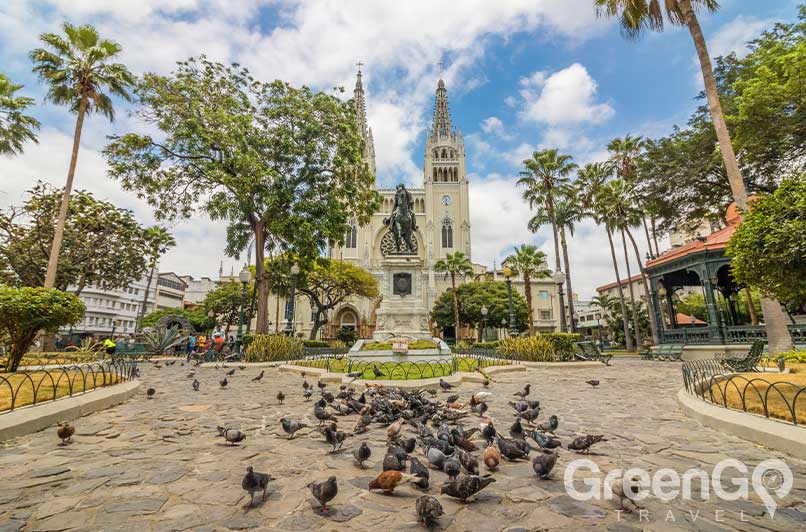 The Metropolitan Cathedral of Guayaquil is undoubtedly one of the most beautiful landmarks in Ecuador. With impressive double ornate towers and its soft color shining in the sun, the place is the epitome of angelic. But it gets better. Prepare to have your mind blown as you step inside. At once, one hundred and twenty-six stained glass windows cascade light upon you from every shade in the spectrum.

Gaze in awe at the magnificent gothic ceilings, and a huge dome. First built in 1547, the establishment underwent rebuilding after it burnt down in 1892. Its reconstruction has included design by Italian, Spanish, and Chilean architects. 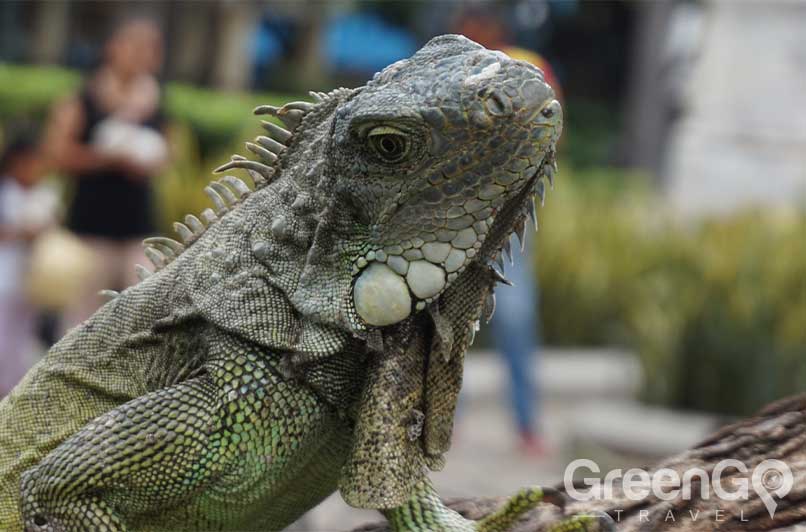 Directly in front of the church is the beautiful Semanario park, which hosts a few unusual inhabitants…giant iguanas that roam freely! Be sure to look up in the trees as well. Vendors sell fresh salad nearby, specially prepared for the iguanas.

In addition to the iguanas, there is a pond full of turtles. One trip advisor contributor illustrates it beautifully: “The statues and old established trees form a great contrast to these prehistoric reptiles who seem unchanged by anything in last million years.” Definitely one of the top free things to do in Ecuador.

A stroll through a cemetery might sound odd, but this one guarantees a memorable experience. The general cemetary of Guayaquil (Cementerio General de Guayaquil) is argued to be the most beautiful and fascinating cemeteries of South America. People from all around the world visit to appreciate the architecture and unique sculptures that adorn the city’s graves of wealthy and illustrious lineages.

The cemetery is known as the “white city,” as it was literally designed as a city for the deceased, even constructed with wide avenues, roads, stairs, and a large gated wall. Stylistically, it has architecture reflecting baroque, Italian, Greco Roman, neoclassical, Jewish, Spanish, Arabic, and Moorish design.

11. Visit the Monument of Guaya and Quil – Things to do in Guayaquil

The name Guayaquil derives from an epic myth dating back to the period of Spanish conquests. According to the tale, chief Guayas of the Huancavilcas married the beautiful Quil.  After refusing to surrender to the Spaniards, they were captured. Chief Guayas offered treasures in exchange for their freedom, of which only he knew the secret location. The Spaniards accepted, and Guayas lead them to the buried hoard.

He requested a dagger to lift the stone covering the riches. The Spaniards obliged. Suddenly, he pierced the heart of his beloved Quil, before turning the dagger unto himself and plunging it into his chest. Thus, he would have two treasures: the river. composed of the blood shed by Guayas, and the noble heart of Quil.

Eloy Alfaro was one of the most important presidents of Ecuador’s history due to his many achievements, including the engineering feat of the Transandino Railway linking Guayaquil with Quito. The Museum contains a mausoleum hosting the monument of Alfaro designed by the talented artist Ivo Uquillas.

Other exhibitions include swords, medals, suits, and other belongings of Alfaro. Aside from the museum, the area is known for fabulous souvenirs and demonstrations by expert craftsmen who weave Panama hats (an Ecuadorian product). The area also has food stalls with delicious Ecuadorian food, craft items, and Panama hats in all price ranges. 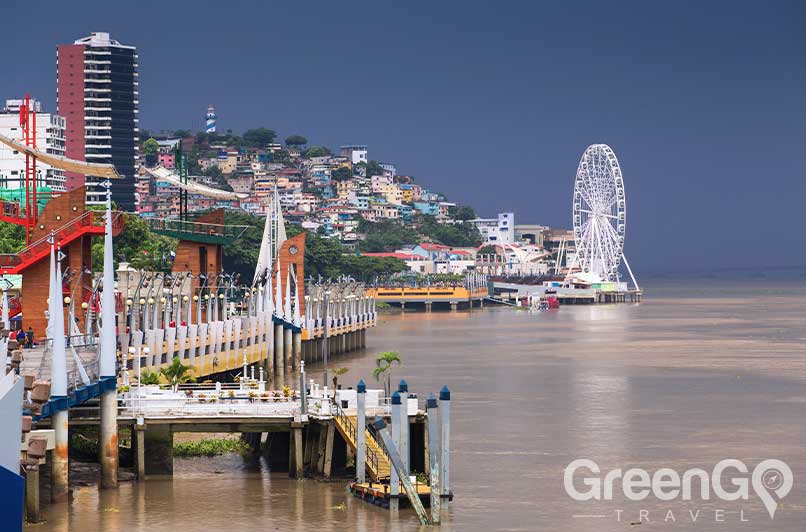 Always top of the list of things to do in Guayaquil is the Malecón 2000, a boardwalk overlooking the Guayas river and navigating through shopping malls, beautifully maintained, gardens, entertainment centers, children’s playgrounds, and public squares. This is the perfect place for a leisurely stroll, a bite to eat, and some people watching. Other notable structures throughout the walk include the Municipal Palace, the Governorate Palace, and the Administration Square. 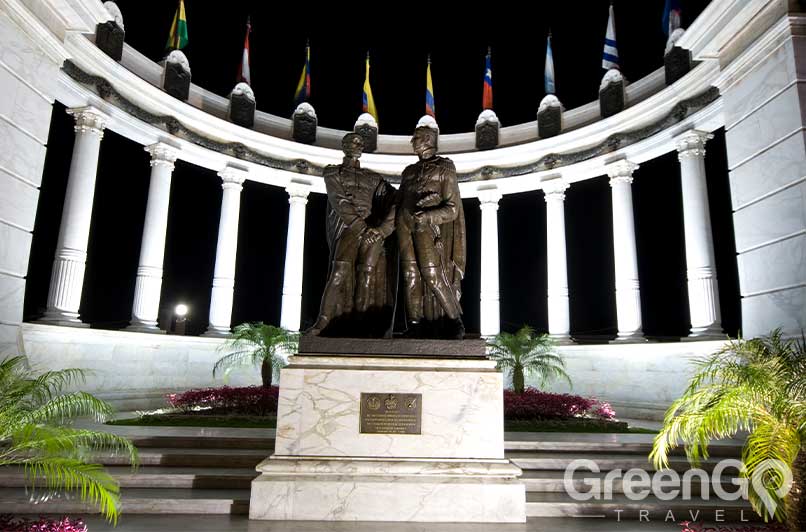 An impressive monument near the main entrance to the Malecon, this statue has great significance to the country. It depicts the meeting between two revolutionary generals, General Simon Bolivar and General San Martin, who emancipated territories of South America from Spanish Colonial rule.

7. Take a spin on La Perla – The Largest Ferris Wheel of South America 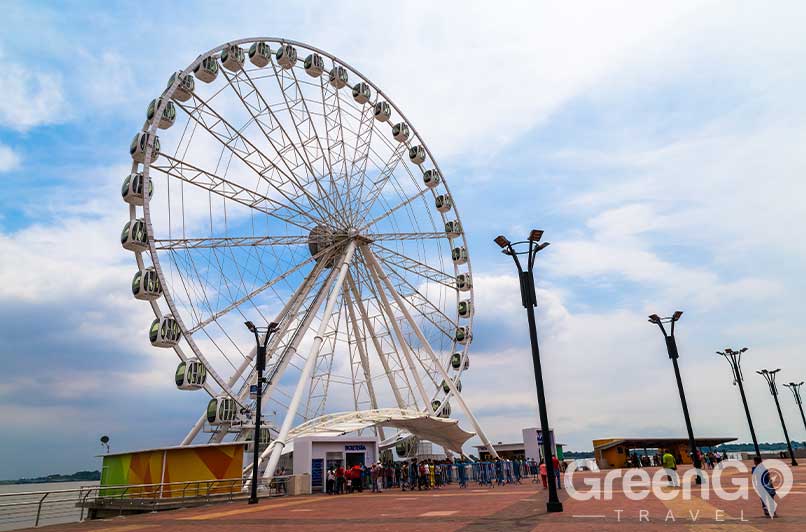 Get a birds-eye view of the city atop the largest Ferris wheel in South America. At almost 200 feet high, the panoramic views are spectacular. Prices are $3.50 (or $7.00 for express) Monday through Thursday, and $5.00 ($10.00 for express) on the weekend.

6. Sunset cruise on the Guayas River 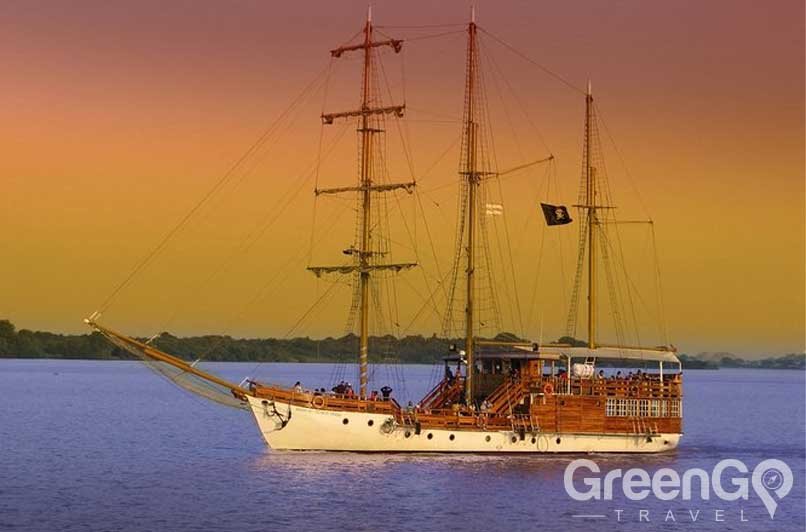 Take a relaxing and romantic one-hour cruise up and down the Guayas river on a classic schooner. This trip showcases spectacular views of Guayaquil’s riverfront, including Santa Ana, Peñas, Malecón 2000, The Santay island, and the Caraguay Market. At only $7 a person, it doesn’t get much better than that. Onboard there is music, alcoholic and nonalcoholic beverages, and small appetizers.

Adding another layer to the experience, the schooner is pirate-themed and staffed by pirates (at least dressed up that way!), as Guayaquil was once a regular target of pirates. There are departures throughout the day, but for the best experience, aim for sunset to get the best pictures and experience cooler weather. On the ship, you listen to music, sip on cocktails or soda, and enjoy small appetizers. 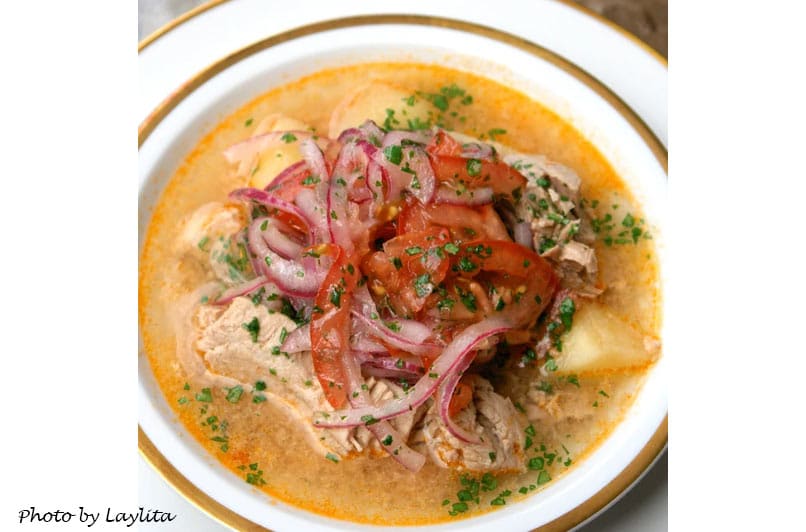 For those fascinated by culture and food, the Caraguay food Market hosts over 750 vendors selling any food product you can imagine. Here, you’ll find mountains of fresh fruits and vegetables at unbelievably cheap prices that may have you thinking of retiring in Ecuador. The specialty, however, is seafood. Come hungry and find a vendor selling crab (Congrejo Criolle),  Seafood and rice (Arroz Marinero), or seafood soup (encebollado)

Guayaquil’s cuisine is very diverse, so you will not have a problem finding something you like. A very popular meal is rice and beans with fried beef, you’ll find this dish everywhere at any time. International fast-food chains are established throughout the city. But if you want to try something different, make sure you taste our bread made from cassava, which is usually accompanied by yogurt. It’s delicious!

Since Guayaquil is a port city, seafood is a predominant component in our traditional dishes. Guayaquileños love seafood soups known as encebollado and ceviche. You can’t leave Guayaquil without trying them. For the best Ceviche, try the other seafood market (Mercado Sauces 9).

4. Eat like a true Ecuadorian at the Central Market (Mercado Central)

The Mercado Central, designed by Italian Architect Luigi Fratta and built-in 1922-23, has a huge variety of mouthwatering Ecuadorian cuisine. A must-have and Ecuadorian staple is roast pork with Mote (a special variety of corn kernels that have been boiled, cooked, and peeled) and peanut sauce. (Hornado con mote y salsa de maní). For the brave of you, try grilled guinea pig (Cuy)! Another staple includes rice, beans, with grilled beef. You’ll find this dish everywhere at any time. Additionally, make sure to taste the cassava bread, which is always accompanied with yogurt.

3. Get your souvenirs at Mercado Artesanal Guayaquil – Things to do in Guayaquil

If Guayaquil is the only city you visit in Ecuador, this is the best place to grab Ecuadorian gifts to take back home. Find STYLISH Panama Hats (an Ecuadorian invention), chocolate bars, embroidered blouses, brightly patterned cotton pants, jewelry produced from native seeds and vegetable ivory, and handwoven baskets

2. Immerse yourself in nature on Santay Island + Alligator sanctuary

Grab a day bag and pack your ID, water, sunscreen, and bug repellant and get ready for nature and wildlife adventure. You can rent a bike in the city and cross the bridge. Once you enter the trails, you’ll spot beautiful blue morpho butterflies frolicking between colorful flowers, birds of all types and colors, and tropical trees. Perhaps the best part is the Caiman (alligator) sanctuary, where you can watch feedings.

1. Feel the electric atmosphere of a competitive soccer match

Guayaquil has two major soccer clubs, Barcelona SC and EMELEC. The rivalry between the two is powerful, and the matchup even has a name: El Clásico del Astillero. When the two teams clash, you can feel the excitement and tension of the fans. The stadium of EMELEC is the George Capwell Stadium, and Barcelona SC plays in the Monumental Banco Pichincha stadium. Even though this matchup is undoubtedly the most exciting, every game is electric!

Visiting the Churute Mangrove Ecological reserve, a site near Guayaquil, will take a day. On this trip, you can listen to the unearthly howls, take a boat trip down the Rio Guayas, and spot a variety of aquatic and jungle birds. Some trips include a visit to a local cocoa farm an important crop in Ecuador, and a workshop where you make your own batch of delicious hot chocolate.

Want to learn about some of the top places to go in Quito? We have a full guide on this city too, and plenty of great content on all our destinations of South America.