956
VIEWS
by Keenan Ennis on July 21, 2019
TwitterFacebookBufferLinkedInPin It
SHARE THIS STORY:

Quito and its Historic Center - with more than 17, 400-year old churches and convents—is ideal for a romantic wedding. Learn more about all the magical options here!

Quito: A Baroque Destination for Weddings

Can you imagine your wedding in a history-filled colonial church, built between the 16th and 18th centuries? These cathedrals create the ideal environment to seal the feelings of a couple’s love; they are places to undoubtedly make the event unforgettable.

One of many beautiful churches in Quito

Quito, the capital of Ecuador, boasts the most beautiful colonial churches in Latin America. This city, declared a UNESCO Cultural Heritage Site in 1978, maintains a number of architectural jewels constructed in the time of the Spanish colonizations and beginnings of the Republic.

Quito´s historic center, holds more than 20 baroque style churches and convents, where you can select the best who fits your dream destination wedding. Some of them are completely out of the classic church, so here we prepared a first shot of the most popular.

One of the churches most highly demanded for weddings is the La Compañía de Jesus, completed in 1614. Its rich internal ornamentation, completely covered with gold leaf, is one of the major tourist attractions of the city and an invaluable national heritage, both artistic and economic.

It was visited by Pope John Paul II, who presided at a mass in the cathedral on January 30, 1985, as part of his three-day visit to Ecuador. It was also visited by Pope Francis on July 7, 2015, who prayed before the image of the Sorrowful.

It is located on the corner of García Moreno and Sucre Streets, right in the Historic Center of the city. The front of its main temple, entirely carved in volcanic stone, is considered one of the most important expressions of Baroque architecture in the Americas and the entire world.  The surroundings are also ideal for the photo album of the bride and groom. And, to add an even more romantic touch, bride and groom can arrive in a horse-drawn carriage.

The church of Guápulo is another recommended site, an old monastery of colonial construction. In the interior rests the image of Our Lady of Guadalupe of Spain, or Guapulo, a work by the Spanish sculptor Diego de Robles. It was the first Ecuadorian Marian sanctuary, built in the second half of the seventeenth century.

The church and convent of Guápulo are embedded in a small plain that joins the city of Quito with the valley of Tumbaco, visitors can arrive through a narrow cobblestone road that is known as the “Camino de Orellana.” Popular wisdom assures that this road was used by the Spanish colonizers to travel to the Amazon in search of the “country of cinnamon”.

The neighborhood that surrounds the church of Guápulo is characterized as the residence of bohemian artists who frequently dress small cafés with incredible views of the Tumbaco Valley. It is a place frequented by tourists who prefer something rustic, less sophisticated. 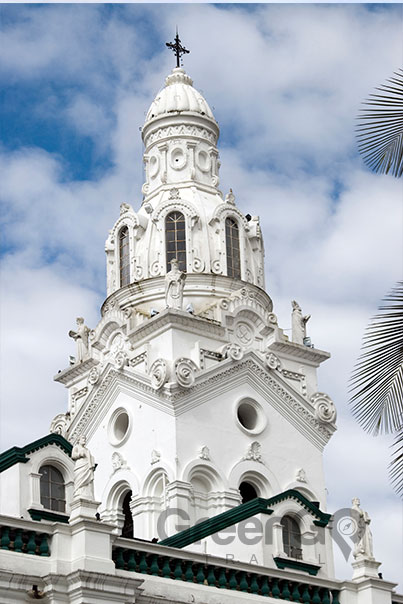 Another place recommended for a beautiful wedding is the church of La Catedral, located in the Historic Center. The Plaza de la Independencia surrounds it, featuring the Presidential Palace (also known as the Palacio de Carondelet), the home and office of the President of the Republic of Ecuador.

The Cathedral was founded in 1535. Its origin was humble, with walls of mud and a straw roof. In 1545, it was named The Cathedral, and in 1562, demolished to be rebuilt with stone bases and a tile roof.

The construction of the church was completed in 1806. Various styles can be seen in this construction, such as Baroque, Mudejar, Rococo, Neo-Gothic and Neo-Classical.

It has an important collection of artwork, paintings and sculptures made by important artists of the Colonial and Republic’s times.

With all this culture and gorgeous churches, you can see that Quito offers wonderful spots for your special day.

The churches are decorated with roses, the emblematic flower of Ecuador. Ecuadorian roses are world famous for their color and stem size. The equatorial conditions of luminosity cause the world’s best roses to grow here, and they do not lack in the decoration.

Of course, after the ceremony comes the party! Nothing is better than celebrating at the Mercure Hotel Alameda Quito, who boasts the Cipreses Mercure baroque style venue, with capacity to hold more than 250 attendees and dancing and music stand to make a full show for your wedding, and a worlds class cuisine that will leave you satisfied with the culmination of this unforgettable date.

Previous Story
Weather in Quito Ecuador: It’s never-ending Changes
Next Story
Taking a taxi in Quito – Know the In & Outs like a Local