3353
VIEWS
by Keenan Ennis on February 10, 2020
TwitterFacebookLinkedInPin It
SHARE THIS STORY:

Do people live on the Galapagos Islands?

For millions of years, the Galapagos islands evolved with nothing on their volcanic landscape aside from the unique endemic creatures. Find out the fascinating answer to the question “Do people live on the Galapagos Islands?” below.

A Brief History – Do people live on the Galapagos Islands? 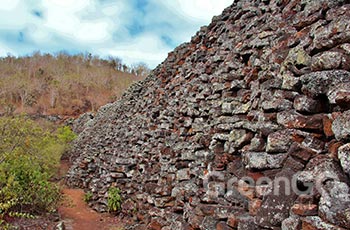 The wall of tears site on Isabela

Humans first set foot on the islands in 1535 after the Bishop of Panama Tomas de Berlanga was blown off course on a trip to Peru. It was not until roughly 50 years later that the Galapagos islands were included on geographical maps when Abraham Ortelius and Gerardus Mercator named the islands “Insulae de los Galapagos” or Islands of the Tortoises. Despite not being on the radar, centuries passed in which the Islands were used by Buccaneers and pirates as a secret hideaway after their raids on Spanish transport gallies, hence the Galapagos Buccaneer cove. The very first island dweller that called Galapagos his home was the marooned sailor, Patrick Watkins, an Irish sailor who made a living in the Islands in 1807 by selling vegetables to whalers until he managed to steal a vessel and head to the Ecuadorian mainland

Fast forward to the 19th century, a time in which whale fat was discovered to be a valuable alternative to kerasine, a product used for fuel. After Captain Washington Gardner returned from the Galapagos with 2,000 barrels full of sperm whale oil, whalers came to the islands in droves. During their sailing ventures, the whalers needed access to fresh water and food. It was during these times their eyes shifted toward the Islands, as the Goliath Galapagos tortoises were a crucial source of protein along with the freshwater sources. Not only could these creatures live up to a year on end without food or water, but they can also weigh 500 pounds! This allowed for long voyages around the world to sell their product.

The First Galapagos Settlers – Do people live on the Galapagos Islands?

The father of Evolution

In 1832, Ecuador annexed the Galapagos Islands. The first migrants? Prisoners. General Jose de Villamil brought prisoners to Floreana Island and began putting them to work. If you visit Isabela island, you have the opportunity to see a remnant which is now called the wall of tears. Many guests even report feeling eerie energy in the air at this site!

Along with this assortment of shady fellows, a group of artisans and farmers came along to make their living. During this time, the Galapagos Islands also became a hotbed of science, no surprise after the travels and studies of Charles Darwin.

However, it wouldn’t be until the 1920s and 1930s that the Islands became more permanently settled upon the arrival of small waves of European settlers to the islands. The Ecuadorian government enacted a law similar to the homestead act, in which the settlers could receive 20 hectares of land, citizenship, fishing rights, and no taxes tax for 10 years.

The first settlers were Norwegians, who settled on the islands of Floreana, San Cristobal, and Santa Cruz. After the Norwegians came, various colonists arrived from Europe, America, and Ecuador. The descendants of German and Norweigan families still exist on the islands to this day!

Exclusive access for savings up to 50%, eligible for subscribed members via email only.

The Galapagos Islands have a beautiful island vibe, where people move more slowly, the environment is more relaxed, and people are friendly and outgoing. There is snorkeling right off many of the islands, restaurants serving exceptional seafood, and small stores to get supplies. There are many schools for children and visitors teaching English. The local inhabitants play soccer games, relax at local bars, and run restaurants and shops.

Fresh catch of the day on Puerto Ayora

However, living on this small island comes with its challenges. Locals must learn to live on local resources, as cargo ships do not always carry sufficient produce to the islands. Their food is grown or harvested from local farmers and fishermen. Products from the mainland are often luxury items, with considerable markup. When I visited the Galapagos Islands, the same bottle of liquor on the mainland marked at 12 dollars increased to 28. However, the tradeoff of not having cheaper products seems worth it, when you recognize that the locals have a life on one of the most unique places on the planet, full of wildlife that has been evolving for millions of years.

Want to Visit the Galapagos Islands?

There are numerous ways to visit the islands, from cruises to land-based tours.  See how to get to the Galapagos Islands, and speak with the GreenGo travel agents to find out the current deals running. Make sure to book far in advance during the busy months, or you might not get your first choice!

Ready to get started with your Ecuador & Galapagos Adventure?

The Best Galapagos Search Engine in the Market!

Tailor & narrow your Galapagos Cruise options – to your liking & specific requests. With over 10 filters, & more being added monthly. Search for your Ecuador & Galapagos dream tour today!

Previous Story
Tourist’s Guide to Diseases in Ecuador and Galapagos
Next Story
Why go to the Galapagos Islands? ?️